I’ve been practicing working on reflective surfaces. I saw an example of someone else that did a drawing of their wedding ring so I thought I would give it a try.

I’d love to know what you all think! 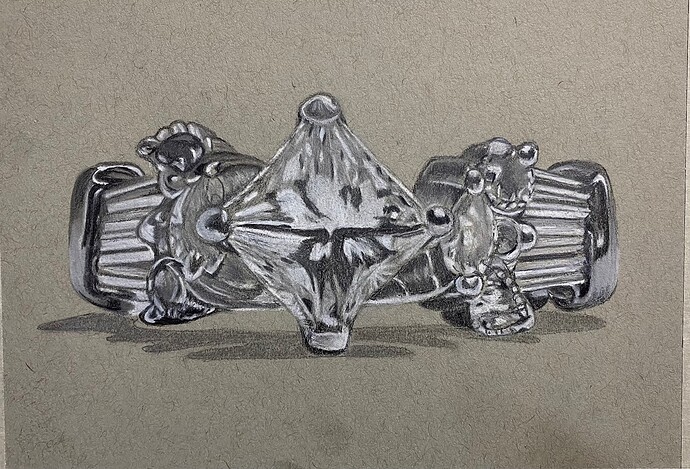 It looks really good! It seems the band has the values pushed to light and dark and is very realistic reflection, the diamond center itself seems to mostly be a mid light color to a mid dark color and no really harsh/bright harsh whites (neon like titanium white maybe gel pen dot?) and really black darks imitating the “sparkle” of the diamond. Mostly in the center areas of diamond, the edges are “lit up” with lots of contrast already. Maybe split the large dark areas and light areas on either side of the center of the diamond to be broken up a bit into “sparkles” with artistic license? (e.g. Put a couple small white points in the dark area and some black outlines to make a white point in the light area?)

If you created this work from the actual ring in front of you as a reference, I can see it would be very hard to get head positioned exactly same spot each time to get the sparkles that are 'white out" bright since they change and move around based on viewing angle. Maybe get it set up so you have some strong sparkle from the diamond center and take a photo of that super sparkle and use it to only touch up and push the values ONLY on the diamond. The band looks great, but the band seems to “out sparkle” the diamond for attention getting. No work on band needed as it is Very realistic on the far left and right sides of the ring and in the spheres around mounts!

Take this with grain of salt, I couldn’t make a drawing anywhere near was good as you’ve done, but the metal is the ‘prettiest’ and most realistic bit to me and I’m trying to explain why from how I see it, which may not be right. (End Disclaimer)

–ETA: It’s still a great drawing as is, again, I couldn’t’ do better, just trying to figure out if the diamond is cut as a pyramid on top or some other way.

Way to go, looks awesome! It’s nice that you challenged yourself with the reflective light!

Great feedback. I actually took a picture of the ring to use as a reference photo. Sounds like I might need to go back in and just push the values a little more in the center diamond.

Thanks! Maybe it’s because I enjoy that style also.